So why would you want to know how to make a snare you may ask. Well lets consider this. You went hiking around noon, it was moderate weather but now its 4pm you are lost and its getting cold, you have no food left and it will be at least several days before rescue can find you. If only you had a survival snare kit with you, you might have dinner tonight.

This scenario happens more than you think. Every year thousands of people get lost and starve to death. It is something that does not need to happen, not when there are tools out there to help you survive. Lets take a look at how you can save your own life by knowing how to build a snare.

Today we are going to learn how to make a snare. Learning to build a snare is really quite simple and is a valuable survival skill to have. Trapping snares are used quite often in trapping industry as they do very little fur damage however making survival snares is also a good way to ensure your survival in the event you are lost in the wilderness or during a serious SHTF scenario.

Understanding how to make a snare involves a few advanced practices to get it just right. Today we are going to look at these steps and get you up to speed on how to make a rabbit snare for survival. These same steps are used to make coyote snares, hog snares and others.

Before we jump in to how to make a snare, we need to understand the different types of materials we can use. Survival & trapping snares can be made of nearly any wire material and even rope. Cables snares are the most common however they can be made of copper wire, rope, flexible cordage made of certain types vegetation etc.

Trapping wire snares are the most basic rudimentary snare and while effective it is not the most desirable choice. We will focus on the most common type snare and that being the cable survival snare.

No time for building snares? Not a problem, we offer 7×7 3/32 cam lock snares, 3/32 micro lock snares and many more. Save time and money buy getting your sanres prebuilt by us.

Survival snares or trapping snares can be made of different type and sizes of cable. Understanding these type cables will help you decide which is best for you. The cable we will use comes in varying diameter. The size we are demonstrating here will be 1/16 and 3/32 galvanized aircraft cable however we will be making this snare with the 1/16 7×7.

We are going to focus on 7 x 7 and 1 x 19 which are the most common in building survival or trapping snares, again in this build example we are using the 7×7 cable. If you want to skip all the building process, we carry Trapping Snares in our shop at great prices.

Before we jump in let’s take a look at the weight rating for each size snare. This can be very helpful when you are trying to decide which cable to use for your target animal.

This will give you a general idea of which cable to use. Lunge pressure from fox or coyote are up for debate but one study noted that a large coyote with a 4.5 foot run can exert around 250 lbs pressure. Below are suggested snare for certain animals.

3/64: Rabbit, Mink, Marten, Small Raccoon
1/16: Rabbit Mink Marten Small Raccoon, Small Fox, Beaver
5/64 and 3/32 are used for larger prey such as wolf, coyote, large fox etc. The 3/32 snare can hold alligator and even small to medium black bear or deer (snaring of deer or black bear is not recommended due to regulations and should only be done in survival situations)

This type is also the hardest to chew through. The only drawback of the 7 x 7  is that it does not easily form a rounded hoop. The hoop tends to be more tear drop shaped requiring more finesse to make a set with.

The 1 x 19 cable is a stiffer cable which forms a more rounded loop. The 1 x 19 is a favorite among small snare users as it’s much easier to set (forming the hoop or business end of the snare) The 1 x 19 is formed with 19 individual strands all wrapped into one single strand of cable. This configuration however is the easiest to break it untwisted and is easier to chew through.

So now that we have a bit of understanding of cable configurations, let’s take a look at the components of the snare. First we will cover the basic parts of the snare here.

The swivel is intended as the anchor point for a snare. As it is called it allows for the cable to swivel when the snared prey is twisting and turning. These are critical in making effective snares.  Some snare makers don’t use these as they feel the extra cost of a few cents per snare is justifiable. This is a huge mistake as not having one allows for more cable breakage and loss of fur (or food in a SHTF scenario). Swivels come in #9 (med to large snares) and #11 gauge (small snares).  The image (top right) shows the swivel head installed on the snare. Now let’s move on to those other parts you see there.

End stops as trappers call them or otherwise known as Ferrules, are the components that make everything in a snare stay together. Notice they are double and single barrel. The double is used to form loops in the cable while the single is used to secure swivels and generally keep all the parts on the snare. These are easily smashed or crimped onto the cable for a secure hold. End stops come aluminum, copper and steel. Fig. 3 above is using steel as it is a big game snare that requires much more holding power.

Steel end stops  require a crimper or machinery to apply the end stop. You can however use an alternative which is heat tempered steel nuts. You can purchase these or make them yourself. We will cover making these in a different article. For now we are focusing on the aluminum stops.

The snare support collar is used to support your snare loop at different heights and allows for better positioning when making a set. Simply insert the wire and twist the the support collar until the fit is tight. Some people use the barrel type but we suggest the twist lock collars as they hold much much better. (top right) you can see the support collar installed behind the swivel.

The washer is a simple yet required component. These can be obtained from any hardware store or you can buy snare washers from us at a discount. These are used to secure the swivel head onto the cable.

Now that you understand the basic parts of a snare, let’s dive into building one. We will do this step by step and when we are done, with some practice you will become a snare building master in no time so lets learn how to make a snare shall we?

Step one: Lay of the snare cable and the first end stop.

Cut the cable to your desired length. We recommend 3 – 4 ft for small snares, 5 – 6 ft for medium and 7 – 8 ft for large snares.  Once you have your cable cut there is a very important crucial step required. Hold the cable (balanced on one finger) to see the lay of the cable. 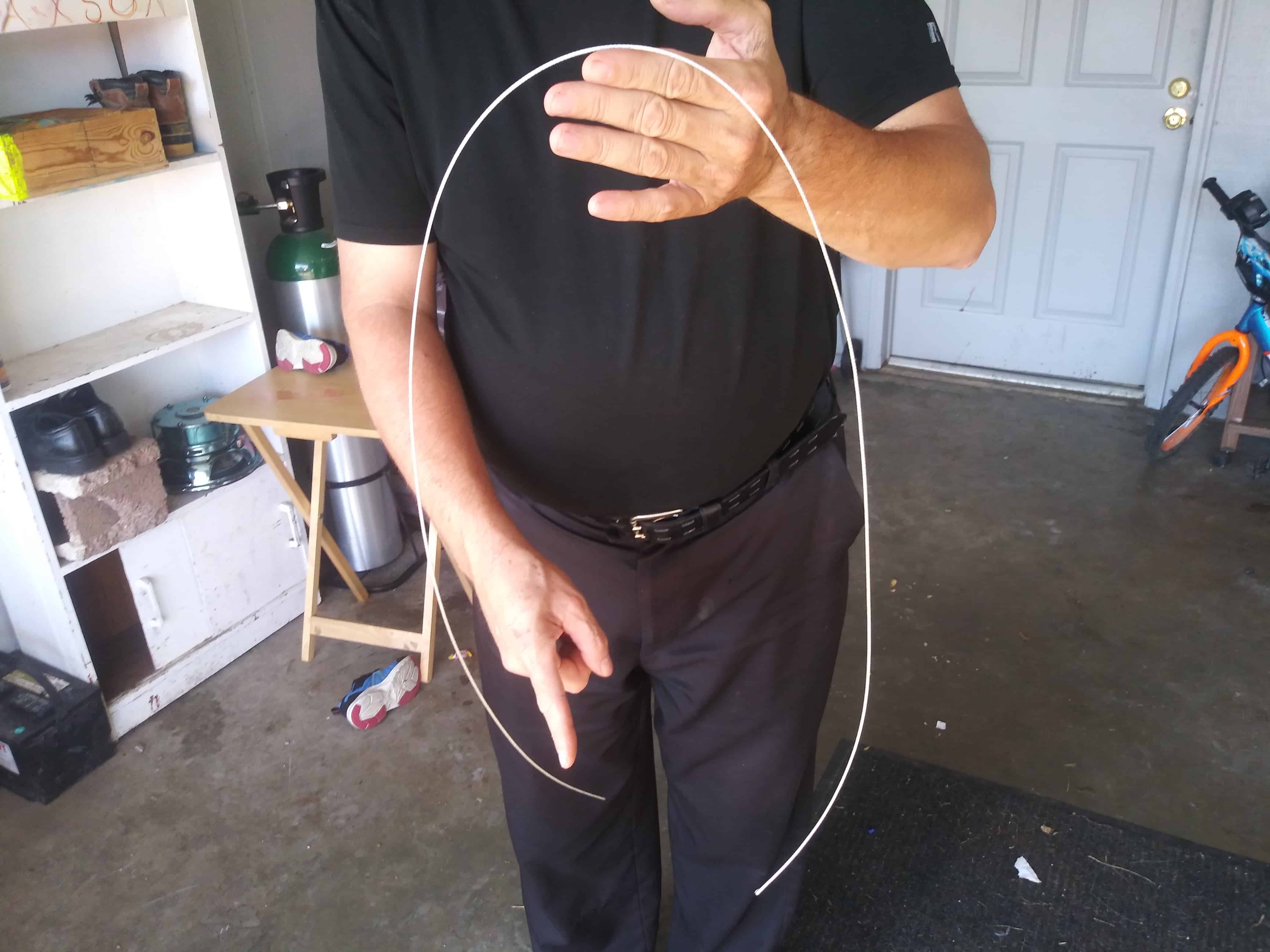 Cable can tend to have a  left or right curve at one end due to being wrapped on the cable spool. If you notice one end curves slightly to the left or right, then this will be the “head” of the cable or anchor point. The reason for this is that when installing the lock end, the loop will be better formed without this curve. Once you find the “head” or “anchor” end of your snare

Install the end stop on the end of the cable that has the curve (if any) as shown below. If the ends are not curved then either end will work.
Hammer the end stop into the cable, it does not take much force, you don’t want them smashed flat, just enough to grab the cable.

Step Two: Install the washer.
Simply drop the washer onto the open end (the end with nothing attached) of the cable sliding it down to the end stop you just installed. This will secure the swivel head that will come on the next step.

Take the open end of the cable and insert it into the barrel opening of the swivel as shown above (note the loop end faces down the cable). Slide the swivel down the cable. Great now we are making snares!

(notice how the washer stops the swivel head from coming off)

Again from the open end of the cable, slide the twist support collar onto the cable as shown above ensuring the large end is facing down the cable toward the swivel head.. Slide the collars down and out of your way to proceed onto the next part.

See the figure below. for more on the micro lock slots.

This is a critical part, you need to get this right. Don’t get discouraged though, practice makes perfect. 60% of all people have difficulty i getting this the first time. It took me many tries to get this right. Nearly everyone will prefect this with practice. This step ensure the micro lock sits right on the snare and closes in the best possible manner with speed.

with all the hardware on the bottom end, hold the snare in one hand loosely. Allow the cable to “naturally” lay across your hand or finger. You will notice that it will fall into its “natural” form. From having been on a spool it has a curve to it, allow the cable to take that natural curve.

Once you have determined the natural curve or “lay” of the cable it is time to make that Shepherds Cane.

Now bend that cable back toward you making sure your cable stays in its natural lay. Grip the end of the cable with your thumb as shown below.

Now crimp the cable with the pliers. You want to form a 90 degree in the cable. 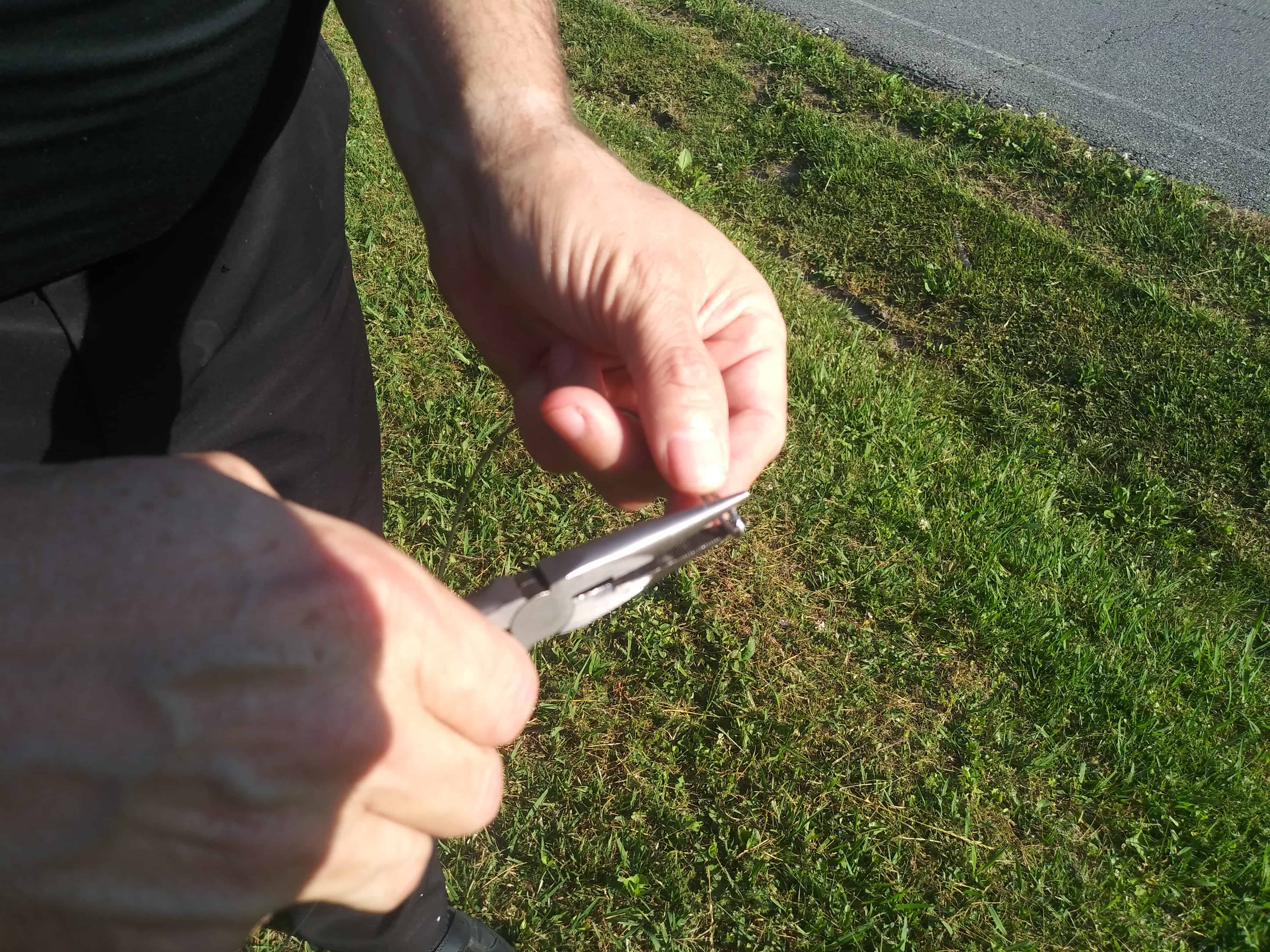 Once finished you should have a cable looking like this. Note the end of the cable, this sometimes happens. The solution is to simply cut that frayed section off and install your end stop. Another solution we found is to use a nail punch 1/16 in diameter and lightly tap out the hole so the cable starts in more easily. In addition you could drill a pilot hole approx 1/16 in in depth to start the cable in. 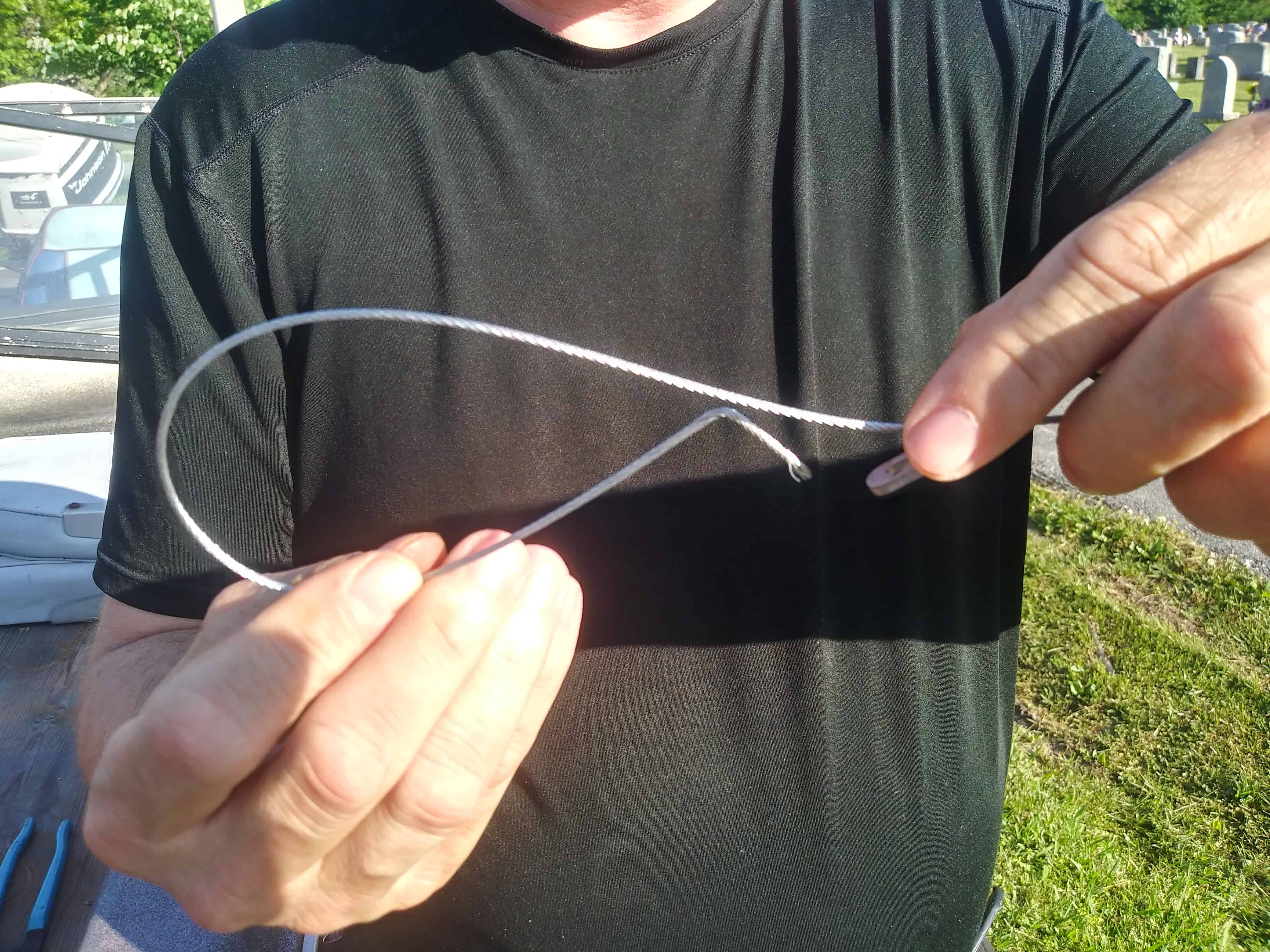 Insert that 90 degree end into the long slot we mentioned before as shown below. Note the frayed end has been cut away.

Install your last end stop. Hammer it down onto the cable (or use crimpers)

The final result should be as shown below.

This, if done correctly will make a fast closing snare.

Congratulation! You just learned how to build survival snares! As we said earlier, learning how to make a snare can help you in survival situations and it can be a bit fun to build your own and see them in action. Learn this skill and pass it on because this is an art we don’t want to be forgotten.
Yes we know there is a creepy cemetery in the background. Happy snaring!